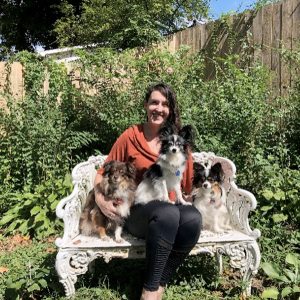 Case of Interest: Sadie is a large, active dog with chronic injury and progressive lameness in her hind legs. After a year with custom orthotics from My Pet’s Brace, the stability in her hock joints has improved considerably.
Diagnostic history: Sadie was diagnosed with bilateral partial gastrocnemius tears in 2018. During an ER visit, her vet noticed lameness and muscle loss in the left leg, but no definitive diagnosis was reached. A few months later, a surgical consult diagnosed both legs as having partial tears after an acute worsening of gait. Sadie’s owners chose rest and conservative treatment for Sadie’s injury at that time.

Over the next several months, Sadie’s lameness worsened. In September of 2019, Sadie’s owner opted for bilateral hock braces to help Sadie walk more comfortably, and Sadie was evaluated at our Pittsburgh facility.

Sadie presented as an energetic, happy dog. Both hocks were fully dropped and the toes on the left leg were severely contracted. Due to Sadie’s size, age, and the chronic nature of her injury, it was determined that non-jointed braces would provide her with the best support.

Sadie’s owner ultimately chose to pursue surgery to repair Sadie’s right gastrocnemius tear. The surgery took place just before delivery of Sadie’s left brace. At delivery, Sadie’s left brace was fitted. Her right leg was casted post-surgically, and the owner was sent home with this brace – to be fitted once the cast was off.

Follow-Ups: Sadie was seen multiple times to fine tune the fit of her braces. Ultimately, joints were added to her right brace in April 2020 to allow for greater range of motion at the hock joint as it healed from surgery. Sadie wore her braces from morning to night daily, and—once her surgical recovery was complete—enjoyed walking, running, and playing in the local creek.

Sadie continued rechecks with her orthopedic veterinarian, who remarked that the stability and muscle hypertrophy in both legs had improved. In August 2020, Sadie’s owner expressed a desire for a new set of braces – both jointed at the hock to allow Sadie to walk more naturally with the braces. New casts were taken of each leg and new jointed braces were delivered in September (right) and October (left) 2020.

Sadie is doing extremely well with her jointed braces. She is able to walk comfortably (and exuberantly) with her braces, even on her non-surgically-repaired leg. Sadie continues to be active and playful in her braces, and her owners are happy that she is able to continue with a normal level of activity despite her injuries.