Case of Interest: Hannibull is an active cadaver dog.  He is trained to detect human remains and alert his handler. He is a working dog that needed support for his CCL injury so he could continue his job. 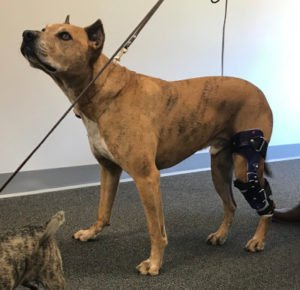 Diagnostic History: Hannibull injured his leg while playing in his yard in early September 2018. He was seen by his veterinarian shortly after and was diagnosed with a CCL tear on his left hind leg. The decision was made to pursue a custom stifle brace for his injury due to the amount of activity that his job required. He was seen at the My Pet’s Brace clinic about a week after the injury for the casting of his leg.  He returned the next day for the fitting of the brace.

The stifle brace is designed specifically for CCL injuries. An anterior strap is fitted to resist tibial thrust during extension. The resistance to the cranial movement of the tibia reduces the pressure that is put on the injured CCL and the scarification that is occurring. The brace is also designed with hard physical stops which do not allow hyperextension of the stifle, further reducing the strain on the ligament.

Follow-Ups: He was seen multiple times at our clinic for check-ups on his progress and brace maintenance. In January 2019, he returned to our facility to have a second, spare brace manufactured. This second brace was used when his original brace was dirty or undergoing maintenance. He wore his stifle brace for nine months. He no longer wears his brace and has regained full weight-bearing and function. Nothing is slowing him down.