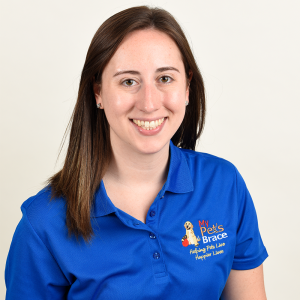 Case Report: Athena was taken in by a local rescue when she was just a few weeks old. She was either born without her left front paw or it was possibly chewed. As a growing mastiff, her veterinarian was concerned about damage to Athena’s remaining front leg due to overcompensation. Her veterinarian reached out to us to discuss a possible prosthetic device for Athena.

Athena visited our facility and we took a cast of her stump. We agreed she was a good candidate for a device as long as her caretakers understood she would need a new device as she grew.

In January of this year, when Athena was six months old, she was fit with her prosthetic device. She acclimated to wearing the device very quickly. She wears the prosthesis several hours a day, wearing it more when she plays or goes for walks.

She’s been using the device for six months. She should be able to wear the current device for the foreseeable future. Her stump and shape of her leg will change as she develops. When the time comes, a second device will be needed to guarantee her front legs are the same height, her shoulders are even and it’s comfortable to wear.

Her foster failure family said, “The prosthetic has allowed her to be an active puppy! She can go for walks, she can wrestle with other dogs and keep up with them when running around. Prior to having the prosthetic, we had to limit her activity so we didn’t put too much strain on her ‘good’ legs.”